Red meat lovers are divided into 3 distinct camps. While they will cross over momentarily into rival territory, the hearth and home where they come home to roost (no roosters for these fanatics!) is clearly the meat that’s the love of their lives. The Pork loyalists with their fascination for ribs and bellies. The beef tenderloin and rib-eye lovers. And the lamb and mutton lovers devoted to chaanp (ribs), nalli (shanks). And the king of them all, Raan – leg of lamb! 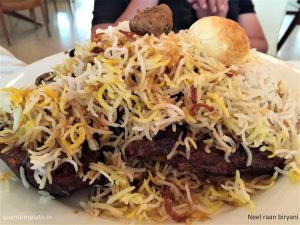 The art of cooking a leg of lamb

Raan is not the tenderest cut of meat. And cooking it till it is fall-of-the bone, meltingly tender is a true art. The list below is my favourite go-to-places for a well-done leg of lamb. Though I must admit that being of the Bengali faith, I love to suck out all the marrow of nallis (life). After having chewed the bones to shreds. This is of course inspired by Thoreau. And reinforced by Robin Williams as he urges his students to ‘Carpe diem’ and ‘Suck the marrow out of life’ (in Dead Poet’s Society).

The first 5 slots are taken up by the ITC group which seems to have comprehensively cracked the code.

Milk braised Kashmiri one at Bombay Canteen – to be sampled

Raan masala at Bohri kitchen – to be sampled

Raan-e-Sikandari at Kakori House – to be sampled

Raan-e-Haqq at Café Haqq se – to be sampled

Khyber Raan at Khyber (where else!) – legendary, to be sampled

Even the thought of cooking this complex dish can be quite intimidating. But Madhur Jaffrey, the original Goddess of Indian cooking shows the way. So, I have rarely gone astray following any of her recipes. I picked her Masaledar Raan recipe in her ‘Indian Cooking’ book to try my hand at cooking it at home. She makes this tough task seem childishly facile.

No prizes for guessing who wins this contest! If you buy your meat in styrofoam containers from an online delivery app then then you have a serious challenge. The first step would be to get the Raan cut, cleaned and ready to be cooked from your butcher.

The next step is to make a paste of onions, garlic, ginger and green chillies.  Mix the cumin, coriander, cayenne, garam masala and salt into the yoghurt. Rub both the pastes into the leg of lamb. The yoghurt and masalas tenderize the meat when left for 24 hours in the fridge. Post that, the meat is allowed to come to room temperature. And then a tempering of whole spices is poured over the leg.

The meat is baked in the oven, covered for about 1.5 hours. And then uncovered for about 45 minutes. Rest the meat and spoon-off the fat. Then, reduce the sauce on the stove-top in case it’s not thick enough. Or simply sieve the sauce and serve alongside the leg of lamb. You can’t but help that sense of pride when you serve up this seemingly complex dish. And wait for the inevitable compliments – mission accomplished!