How Brad Pitt elevates eating to the fine art of acting 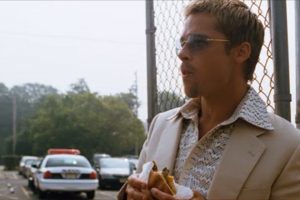 Haven’t you watched a Brad Pitt movie and remarked on how much food the dude puts away on screen? Seriously, how can a guy that slim eat so much? This moment of truth (or reelization!) came to me when I was watching Ocean’s Eleven – Brad is eating in every single scene of the movie. Go watch it again just to check out Brad’s eating prowess. The one exception to this rule seems to have been Seven with its abundance of nausea inducing goriness that precludes any form of eating, especially the horrific ‘Gluttony’ scenes.

Brad seems to labour under the misapprehension that Eating is analogous to Acting or someone must have told him he looks delectable when he is eating or he has a tremendous oral fixation or he does it to look casual and cool – whatever the reason, we have to put up with enormous amounts of food being devoured on screen. So speaketh someone who has clearly chosen her side in the Brad Pitt versus Leonardo DiCaprio battle. Check out Leonardo acting by not eating in Revenant and I rest my case. You had me at Inception I say! 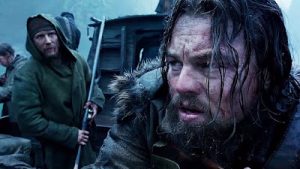 Read the other food on celluloid posts. Audrey Hepburn the forever girl or Umeboshi plums and Grave of the fireflies . Or Of Amitabh Bachchan, watermelons and feeding frenzies